Tarot Reading What lies in my future? 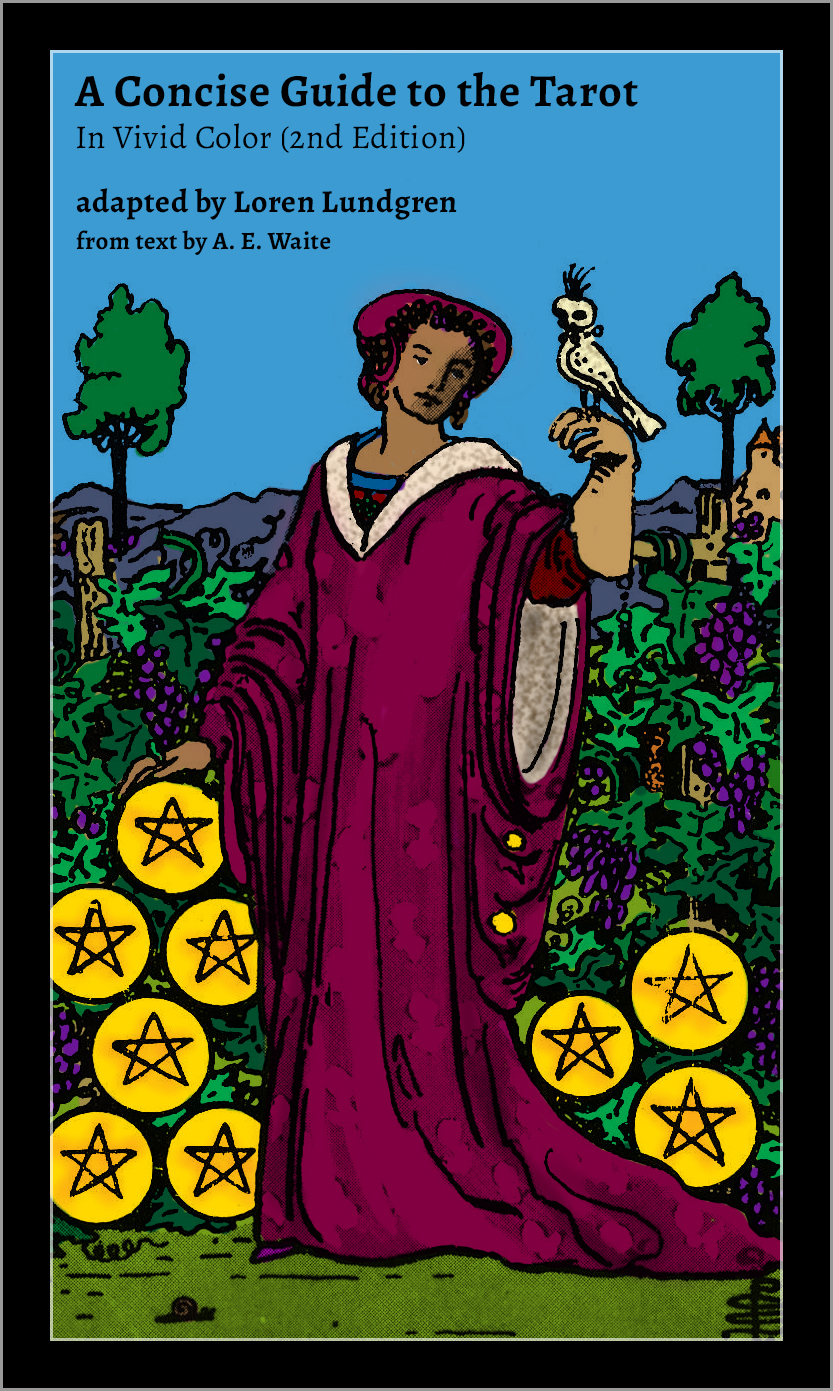 Eight of Cups from the Rider Waite Smith Tarot Deck

A man of dejected aspect is deserting the cups of his felicity, enterprise, undertaking or previous concern.

Nine of Pentacles from the Rider Waite Smith Tarot Deck

A woman, with a bird upon her wrist, stands amidst a great abundance of grapevines in the garden of a manorial house. It is a wide domain, suggesting plenty in all things. Possibly it is her own possession and testifies to material well-being.

Six of Wands from the Rider Waite Smith Tarot Deck

The card has been so designed that it can cover several significations; on the surface, it is a victor triumphing, but it is also great news, such as might be carried in state by the King's courier; it is expectation crowned with its own desire, the crown of hope, and so forth.

A laurelled horseman bears one staff adorned with a laurel crown; footmen with staves are at his side.

Page of Cups from the Rider Waite Smith Tarot Deck

Fair child. A messenger. A birth.

A fair, pleasing, somewhat effeminate page, of studious and intent aspect, contemplates a fish rising from a cup to look at him. It is the pictures of the mind taking form.

The Tower from the Rider Waite Smith Tarot Deck

Occult explanations attached to this card are meagre and mostly disconcerting. It is idle to indicate that it depicts min in all its aspects, because it bears this evidence on the surface. It is said further that it contains the first allusion to a material building, but I do not conceive that the Tower is more or less material than the pillars which we have met with in three previous cases. I see nothing to warrant Papus in supposing that it is literally the fall of Adam, but there is more in favour of his alternative--that it signifies the materialization of the spiritual word. The bibliographer Christian imagines that it is the downfall of the mind, seeking to penetrate the mystery of God. I agree rather with Grand Orient that it is the ruin of the House of We, when evil has prevailed therein, and above all that it is the rending of a House of Doctrine. I understand that the reference is, however, to a House of Falsehood. It illustrates also in the most comprehensive way the old truth that "except the Lord build the house, they labour in vain that build it." There is a sense in which the catastrophe is a reflection from the previous card, but not on the side of the symbolism which I have tried to indicate therein. It is more correctly a question of analogy; one is concerned with the fall into the material and animal state, while the other signifies destruction on the intellectual side. The Tower has been spoken of as the chastisement of pride and the intellect overwhelmed in the attempt to penetrate the Mystery of God; but in neither case do these explanations account for the two persons who are the living sufferers. The one is the literal word made void and the other its false interpretation. In yet a deeper sense, it may signify also the end of a dispensation, but there is no possibility here for the consideration of this involved question.

The Hanged Man from the Rider Waite Smith Tarot Deck

The gallows from which he is suspended forms a Tau cross, while the figure--from the position of the legs--forms a fylfot cross. There is a nimbus about the head of the seeming martyr. It should be noted (1) that the tree of sacrifice is living wood, with leaves thereon; (2) that the face expresses deep entrancement, not suffering; (3) that the figure, as a whole, suggests life in suspension, but life and not death. It is a card of profound significance, but all the significance is veiled. One of his editors suggests that Eliphas Levi did not know the meaning, which is unquestionable nor did the editor himself. It has been called falsely a card of martyrdom, a card a of prudence, a card of the Great Work, a card of duty; but we may exhaust all published interpretations and find only vanity. I will say very simply on my own part that it expresses the relation, in one of its aspects, between the Divine and the Universe. He who can understand that the story of his higher nature is imbedded in this symbolism will receive intimations concerning a great awakening that is possible, and will know that after the sacred Mystery of Death there is a glorious Mystery of Resurrection.

Ten of Pentacles from the Rider Waite Smith Tarot Deck

A man and woman beneath an archway which gives entrance to a house and domain. They are accompanied by a child, who looks curiously at two dogs accosting an ancient personage seated in the foreground. The child's hand is on one of them.

Three of Pentacles from the Rider Waite Smith Tarot Deck

A small sum of money.

A sculptor at his work in a monastery. Compare the design which illustrates the Eight of Pentacles. The apprentice or amateur therein has received his reward and is now at work in earnest.

The Devil from the Rider Waite Smith Tarot Deck

The design is an accommodation, mean or harmony, between several motives mentioned in the first part. The Horned Goat of Mendes, with wings like those of a bat, is standing on an altar. At the pit of the stomach there is the sign of Mercury. The right hand is upraised and extended, being the reverse of that benediction which is given by the Hierophant in the fifth card. In the left hand there is a great flaming torch, inverted towards the earth. A reversed pentagram is on the forehead. There is a ring in front of the altar, from which two chains are carried to the necks of two figures, male and female. These are analogous with those of the fifth card, as if Adam and Eve after the Fall. Hereof is the chain and fatality of the material life. The figures are tailed, to signify the animal nature, but there is human intelligence in the faces, and he who is exalted above them is not to be their master for ever. Even now, he is also a bondsman, sustained by the evil that is in him and blind to the liberty of service. With more than his usual derision for the arts which he pretended to respect and interpret as a master therein, Eliphas Levi affirms that the Baphometic figure is occult science and magic. Another commentator says that in the Divine world it signifies predestination, but there is no correspondence in that world with the things which below are of the brute. What it does signify is the Dweller on the Threshold without the Mystical Garden when those are driven forth therefrom who have eaten the forbidden fruit.

Five of Wands from the Rider Waite Smith Tarot Deck

A posse of youths, who are brandishing staves, as if in sport or strife. It is mimic warfare, and hereto correspond the divinatory meanings.